Photography Exhibition
with works from Eckhard Hammel and Angela Scheuren 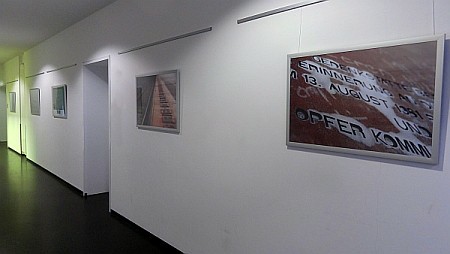 There are monuments (Denkmale) in every metropolis. However, in no other urban landscape are the memorials (Mahnmale) and commemorative sites as numerous as in the capital of the Federal Republic of Germany. Berlin is the only metropolis globally with an extensive culture of memory in the form of Mahnmale: Berlin Memopolis.

In every language one will find a pendant for the German word Denkmal (for example “memorial” or “monument”), but not for the word Mahnmal. In the German language this is a special word, which is difficult to translate into other languages. It consists of the verb mahnen and the noun Mal. The verb mahnen encompasses attentive remembrance as well as an attentive anticipation of the future. A Mal is a characteristic or feature that demands attention. We have decided to translate the word Mahnmal into the term “Mahn-Memorial”.

(...)
Numerous Mahn-Memorials answer this question by refusing the regular and ordinary forms of communication. That is why they always appear isolated and solitary in the urban environment. They appear to be a collection of pieces, fragments and partial objects that constantly vary in appearance depending on the perspective. They only can describe the undescribable by presenting distorted forms. Fragmented bodies, torn apart, broken.